Urban One, Inc. Chairwoman Receives Congressional Recognition And NABJ Hall Of Fame Accolades For 40 Years Of Service To The African American Community

, /PRNewswire/ --  Executive Vice President and Chief Adminstrative Office  announced today Founder and Chairwoman, and CEO Alfred Liggins III, have received Congressional commendations for 40-year anniversary and its impact on the national media landscape.  Congressional leaders, the Honorable of the and the Honorable of the both recognized 40 years of service with statements on the floors of the and , respectively, as 2020 comes to a close.  Additionally, Hughes was inducted into the Hall of Fame for the (NABJ). 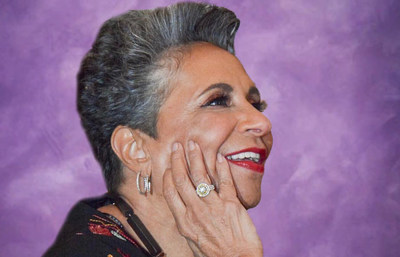 celebrated its milestone anniversary of 40 years amid the unprecedented social, political, and economic challenges presented in 2020.  Representative and both entered tributes to the company into the Congressional records of both the and , paying homage to Hughes' career and contributions to the media industry.

"Mr. President, I rise today to honor a tenacious, entrepreneur, visionary radio personality, and powerful advocate for the community, ," noted . "This year, her pioneering radio company, , celebrated 40 years on the air.   has left an indelible mark on the and inspired millions of listeners across the country."

Representative acknowledged the impact  has had on the national media landscape and the contribution of Liggins, Hughes' son and business partner, who is responsible for taking the company public. "In 1999, at the recommendation of her son, who had received his MBA at the of the ,  became the first woman to chair a publically held corporation…" included in her statement for the Congressional record.  "I ask the to join me in recognizing the accomplishments of on the occasion of the 40th anniversary of ."

"I am deeply humbled by this prestigious recognition and grateful that contributions are now a part of our nation's Congressional record," said Hughes. "The year 2020 will long be remembered as a year that challenged and changed our country, and while we faced unprecedented trials, this honor and our opportunity to be of service to the black community are among the highest distinctions we have received."

Hughes was also inducted into the along with other noted media professionals, including senior correspondents and FOX NFL reporter and Chicago columnist .

postponed plans to commemorate its milestone anniversary with an event.  Instead, it established a new foundation, Urban One Community Works, a non-profit that provides financial support to organizations and programs that work to strengthen and improve the quality of life of African Americans in the markets it serves.  Its inaugural donations were made in support of agencies providing aid to families struggling due to COVID-19.

(urban1.com), together with its subsidiaries, is the largest diversified media company that primarily targets and urban consumers in the United States.  is the parent company of Radio One, (blackamericaweb.com), TV One (tvone.tv),  TV (mycleo.tv), iOne Digital (ionedigital.com) and One Solution.  Formerly known as , the Company was founded in 1980 with a single radio station and now owns and/or operates 59 broadcast stations (including HD stations) in 15 urban markets in , making it one of the nation's largest radio broadcasting companies.  The Company's growth led to diversification into syndicated radio programming, cable television, and online digital media.   As a result, in 2017, was renamed to better reflect the Company's multi-media operations.  While the Company was renamed , Radio One remains the brand of the radio division and all of its radio assets.  Through Reach Media, Inc., the Company operates nationally syndicated radio programming, including the Rickey Smiley Morning Show, the Russ Parr Morning Show, and the DL Hughley Show.  TV One is a national cable television network serving more than 59 million households, offering a broad range of original programming, classic series, and movies designed to entertain, inform and inspire a diverse audience of adult Black viewers. Launched in , CLEO TV is a lifestyle and entertainment cable television network targeting Millennial and Gen X women of color.  iOne Digital is a collection of digital platforms providing the community with social, news, and entertainment content across numerous branded websites, including Cassius, Bossip, HipHopWired, and MadameNoire branded websites.  One Solution provides award-winning, fully integrated advertising solutions across the entire multi-media platform.  Through its national, multi-media operations, the Company and One Solution provides advertisers with a unique and powerful delivery mechanism to and urban audiences.  Finally, owns a minority interest in , a gaming resort located in .